I am excited to be a part of the Visions of Zarua blog tour and today I’m going to re-post my review of this amazing book by Suzanne Rogerson along with a few extras: 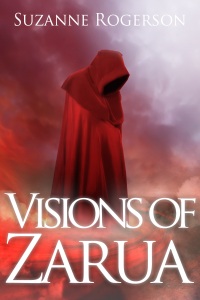 Together they must save the realm of Paltria from Zarua’s dark past.

An ancient darkness haunts the realm of Paltria.

Apprentice wizard Paddren is plagued by visions of a city on the brink of annihilation. When his master Kalesh dies in mysterious circumstances, the Royal Order of Wizards refuses to investigate.

Helped by his childhood friend, the skilled tracker Varnia, and her lover Leyoch, Paddren vows to find the killer.

The investigation leads Paddren down a sinister path of assassins, secret sects and creatures conjured by blood magic. But he is guided by a connection with a wizard from centuries ago – a wizard whose history holds the key to the horror at the heart of the abandoned city of Zarua. Can Paddren decipher his visions in time to save the Paltrian people from the dark menace of Zarua’s past?

This book has become a favourite of mine.  Here is my review:

This is a dark and thrilling fantasy book that really keeps you gripped from beginning to end.  Set in the world of Paltria, where there is magic, wizards and dark creatures, Paddren and his friends begin their journey by trying to save his master Kalesh.  But when Kalesh is found dead they must find out why and their search reveals the dark and sinister past haunting Paltria.

This book is one of the best fantasy books I’ve read to date!  From the very first chapter I was hooked to read more and it isn’t many books that truly keep you reading from the very beginning to the very end.  Although set in Paltria, Visions of Zarua  has two stories that slowly unfold as you read through this book.
The first story follows Paddren, Varnia and Leyoch as they find out what happened to Kalesh and uncover the sinister truth of what is happening in Paltria.  This story is told from the third person perspective.
Set 350 years in Paltria’s past, the story of Zarua plays out in alternate chapters.  This story is told from the first person perspective and although there’s no initial link between the two stories, as you progress through the chapters you learn how both are connected.
Having two seemingly separate stories that run together may seem confusing, but it really isn’t.  The stories are so well told that you never get lost for too long in one, to forget what has happened in the other and the different perspective makes it easier to follow.

The descriptive passages are longer than in some books and although some people may not like this longer text, me included, it really does make you feel the atmosphere, smell the smells, feel the darkness.  It didn’t take long to get used to this style of writing and I have to admit that if it wasn’t for the author, Suzanne Rogerson’s, wonderful descriptions, this book just wouldn’t be as good as it is.

A lot happens in this book, in both the past and present, but you never get confused or lost in the plot.  In fact the story just becomes more and more exciting as you get closer to the end.  The ending is a satisfying one but not really predictable which just makes this an even better read.

As far as swearing, the book has two uses of the s word and several uses of the b word, but these are used in conversation and to great effect and not out of place as with some novels.  There is no sex but there are some very dark descriptions that would be too chilling for younger teens to read.

Overall I just love this book, I love it so much I already feel like reading it again after I’ve just finished it – the mark of a truly great novel.  I’d recommend this book to anyone who loves to read fantasy, the characters are good and complex, the whole tone is dark and the story really holds your attention right to the end, you even get the final satisfaction of understanding the character on the front cover.  Visions of Zarua is a wonderful and thrilling read and I can’t wait to read more of this author’s work.

Here is an exciting extract from the book: 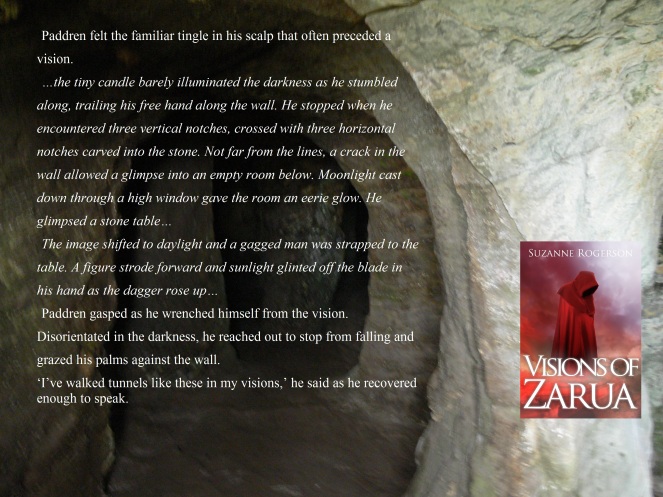 About the author Suzanne Rogerson:

Suzanne lives in Middlesex, England with her hugely encouraging husband and two children.

She wrote her first novel at the age of twelve. She discovered the fantasy genre in her late teens and has never looked back. Giving up work to raise a family gave her the impetus to take her attempts at novel writing beyond the first draft, and she is lucky enough to have a husband who supports her dream – even if he does occasionally hint that she might think about getting a proper job one day.

Suzanne loves gardening and has a Hebe (shrub) fetish. She enjoys cooking with ingredients from the garden, and regularly feeds unsuspecting guests vegetable-based cakes.

She collects books, loves going for walks and picnics with the children and sharing with them her love of nature and photography.

Suzanne is interested in history and enjoys wandering around castles. But most of she likes to escape with a great film, or soak in a hot bubble bath with an ice cream and a book.

I’ve enjoyed being part of the Visions of Zarua blog tour.  Why not pay one of the other participating blogs a visit:

Sun 10th July color me in Cyanide and Cherry Review